Two day conference “Equal Representation FOR Women”, organized by members of the Women’s Caucus of House of Representative of FBiH Parliament with International Republican Institute (IRI) and Foreign Policy Initiative BH (FPI BH) was held in Sarajevo on 12-13 May 2016. The aim of the conference, focused at the implementation of UNSCR Resolution 1325, was making of conclusions and recommendations which will help the efforts on strengthening the position of women in political, economic and social life in BiH through a joint action by members of the Women’s Caucus and the participants. Based on the discussions during the conference, initial conclusions were made and the next period will see intensification of efforts needed for the implementation.

H.E. Ambassador Maureen Cormack, US Ambassador to BiH and H.E. Edward Ferguson, British Ambassador to BiH, deliver the keynote speech and opened the conference. The Ambassadors highlighted the importance of organizing such an event and commended the efforts of the Women’s Caucus in emphasizing the relevance of political empowerment, economic participation and safety of women. “More women need to be present in the room where big decisions are being made,” Ambassador Cormack stated, adding that women are the future and the strength of this country. Ambassador Fergusson underlined that a change in mindset is necessary in order to achieve gender equality and stressed the importance of quality education which will enable women to develop skills and have competence to succeed.

Why is underrepresentation of women in decision making bodies still significant, why is the society still not ready to realize enormous potentials of women, are we missing women in the government, stereotypes and personal experiences were some of the topics discussed by members of panels, representatives of legislative and executive government in BiH, esteemed experts from the country and region. The participants emphasized that gender equality in political participation is the core of contemporary democracy and the most important factor for achieving gender equality.

Organizers of the conference, Zana Marijanović, Darijana Katić, Emina Mutap and Alma Macić stated their aim was to spread the messages that there is no future for a society in which women’s voice is not present and that urgent reforms are needed in order to achieve gender equality in all aspects of life. Participants highlighted the need for ensuring media presence of women’s rights and different aspects of the struggle for equality which quite often get overlooked as well as the need for cooperation between representative of legislative and executive branches of government with the civil society and international organizations. 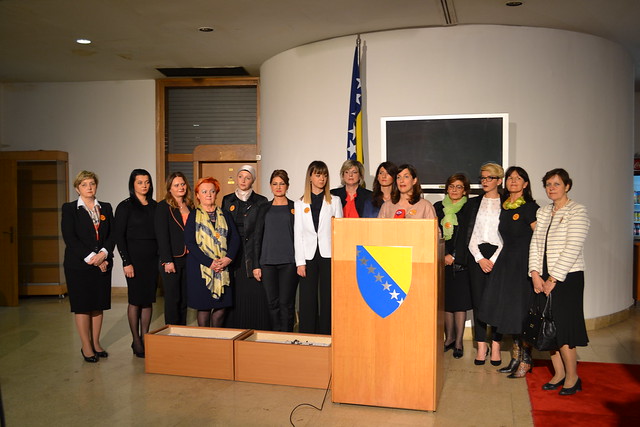