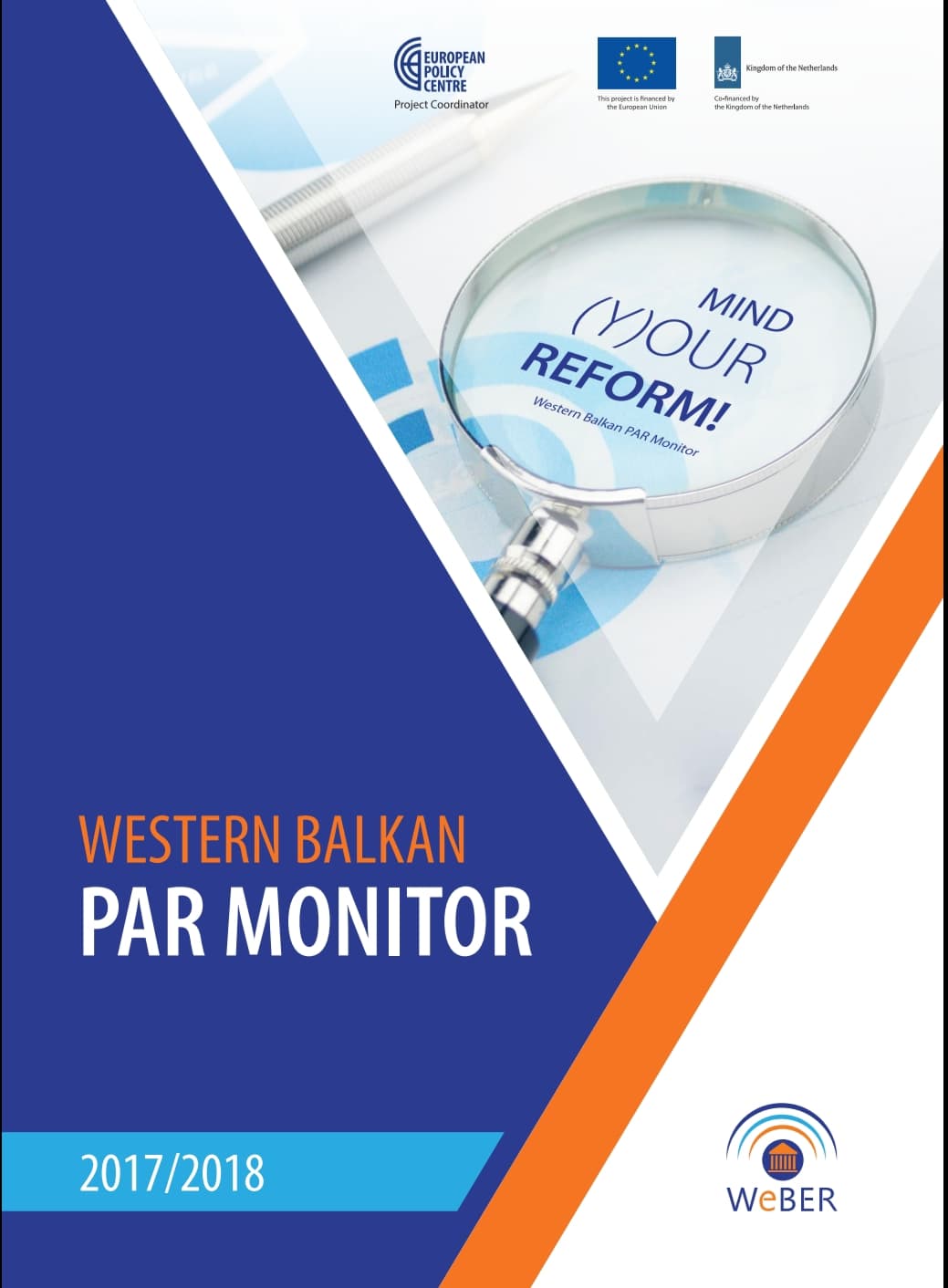 The PAR Monitor is the result of research undertaken over the past year by the Think for Europe Network, with the goal of providing a systematic civil society monitoring of public administration reforms (PAR) in the Western Balkans. This exercise was motivated by the need to strengthen domestic, bottom-up pressure from the civil society sector in the long run, in
order to ensure that post-EU accession, when the leverage of the EU’s conditionality in the governance area weakens, the reform drive endures. Based on a robust methodological approach, combining quantitative and qualitative techniques, and building on the EU’s Principles of public administration, the PAR Monitor measures the countries’ state of play in PAR, benchmarks them against each other, and provides recommendations for improvement. The PAR Monitor also ensures complementarity with the monitoring carried out by SIGMA/OECD and the European Commission. It therefore provides a citizen and civil society focused perspective on the EU-SIGMA principles.

The PAR Monitor comprises an overall comparative regional report and six country reports, each including findings on the 23 compound indicators designed by the WeBER project team to monitor a selection of 21 EU-SIGMA principles.

Public administration reform (PAR) is today considered a fundamental requirement for the EU aspirants on their accession path. As a complex and all-encompassing reform, PAR in the Western Balkans region is being thoroughly assessed through the lenses of the SIGMA Principles of
Public Administration, developed by the OECD/SIGMA and endorsed by the EU. These Principles define what makes a well-functioning administration in terms of its ability to deliver transparent, efficient and effective services to citizens, and to support socio-economic development.

In the context of a high external pressure for tangible developments in PAR, home-grown demand for better administration becomes even more important, to keep pressuring the government to pursue reforms once the external conditionality dissipates as the result of a completed accession process. Civil society actors, with local knowledge of administration’s
functioning, can lead such domestic advocacy efforts aimed at better administration. Independent PAR monitoring and evidence-based dialogues with the government represent a good approach to achieve this goal.

Based on such a rationale, the WeBER project has completed its first monitoring cycle. Its structured and evidence-based approach to PAR monitoring brings the reform closer to the public, by particularly focusing on PAR aspects with most relevance to the civil society and the public.
WeBER PAR monitoring strongly relies on strengths, skills, and local knowledge of the civil society in the Western Balkans. It builds on the SIGMA’s Principles of Public Administration as a cornerstone of PAR, while assessing them from the standpoint of an independently produced
PAR Monitor methodology. Overall, the methodology is based on the selection of 21 SIGMA Principles within six key areas, monitored and reported through 23 compound indicators that focus on different aspects of PAR.