Freedom can be defined as the possibility of self-reliant, independent action or human self-determination. In a broad sense, it refers to the claim to be free – unlimited, entrapped.
The ideal of freedom is the driving force of human activity.

It is not uncommon for personal freedom to cease to be freedom and become a cage for others in a space as vast and limitless as the Internet, limited by the boundaries of desktop and cell phone screens. Hate speech is becoming more common, because the author of a particular article or commentary on such views reflects all his or her courage in the blank space for the signature or pseudonym, which serves as a kind of guardian of the real name and surname. So, we have a whole army of brave internet warriors, supporters of various fascist, racist, and chauvinist ideas that, as the internet frequently reminds us, have yet to be defeated.

We are frequently unaware that harmless jokes, the use of derogatory epithets, humiliating insinuations, and insulting allusions are all milder forms of hate speech. More severe forms that directly call for violence and discrimination against a specific group are not uncommon.

The Internet allows for a complete freedom of expression of both formed and unformed, raw thoughts. As a result, it rolls and expands, like a snowball from the top of a hill, increasing in volume until it can suffocate that reasonable thought that was quieter. The main issue that comes with the freedom that the internet provides is untrustworthy information from even less trustworthy sources, which often needs to be carefully weighed. Because the internet is a near-instant source of information, it is rarely checked. And, as much as we are free to express our opinions, congratulate, rejoice, speak out against certain injustices, raise awareness of certain problems, as much as we are free, we are so unprotected. So many profiles of various motives at our fingertips that are very skillfully use opportunities for manipulation. As a result, it is not uncommon to hear about child exploitation, elderly scams, and bogus online shopping. Let us recall the mass suicides of children and teenagers which came as a result of video games. Our laptops and cell phones appear to be the gateway to a cruel and harsh world that spares no one.

In the real world, freedom means security, and it means a good night’s sleep. On the Internet, this is not the case. Technology advancement appears to have greatly contributed to decreased security, both because of the previously mentioned false representations, the photos that we share so peacefully with the world, and because of the location and all the information that is frequently subject to abuse.

However, there are some positive examples of how total Internet freedom can sometimes mean raising awareness of certain issues. Thus, many environmental initiatives, for example, have begun their initiatives on the Internet. For the first time, the world learned about the Uyghur genocide through videos and pictures, as well as victim testimonies that circulated online.

Furthermore, we live in an era that can rightly be described as the age of accessible information. We can find information about almost anything by typing words into a search engine. As a result, we have complete freedom to collect free knowledge without purchasing encyclopedias. And the only man who is shod with knowledge is a free man.

Returning to the original definition, we see that the empty space filled with profile names in which we can act freely is, in fact, freedom. It is only necessary to set others free because putting shackles on others does not allow us to escape the cage. It is necessary to outgrow the Internet now, after we have introduced it to its full potential. Because we go backwards by forcing steps forward, natural intelligence triumphs over artificial intelligence. As a result, we will value books and authors, newspapers and journalists, analysts, lawyers, economists, physicians, and professors. We need to pay more attention to security and protection on the Internet, and we need to lock that door tightly.

If we don’t start outwitting the intelligence we have developed, we will end up in the clearing, like rabbits waiting for hunters from all sides.

This blog was created and won an award as part of the MladiRini competition for the best blog in BiH and is published on MladiRini platform as well. This platform was created as part of our project Building the Future Together: The EU and the Western Balkans from the perspective of young people supported by the Executive Agency for Educational, Audio-Visual and Cultural Policy through from Europe for Citizens program.

„Could preservation of a frozen conflict be the final solution of The Trouble?“
The EU as a promoter of democracy or ‘stabilitocracy’ in the Western Balkans? 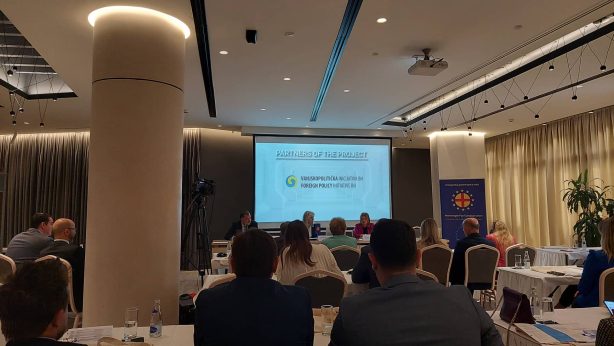