On 28 September 2018, Foreign Policy Initiative BH (FPI BH, Sarajevo), in cooperation with the Austro-French Centre for Rapprochement in Europe (CFA/ÖFZ, Vienna), Centre international de formation européenne (CIFE, Nice/Berlin), with the support of and in cooperation with the Open Regional Fund for SEE – Promotion of EU Integration (German Cooperation / GIZ), Institut français des relations internationales (IFRI, Paris), Istituto Affari Internazionali (IAI, Rome), and German Institute for International and Security Affairs (SWP, Brussels) and the European Commission (Erasmus+-Programme), had organized a Conference titled The European Union and the Western Balkans: Moving apart or together?. The Conference was organized in framework of the Austrian Presidency of the Council of the European Union.

After years out of the radar, the Western Balkans now seem to be back on the agenda of the EU. The new Enlargement Strategy, issued in February 2018 and the EU-Western Balkans Summit convened in Sofia in May 2018, fifteen years after the Thessaloniki Declaration, both tentatively illustrate the new impetus given by the EU to its enlargement policy. The new dynamic that may be emerging builds on four years of Berlin process. After Berlin, Vienna, Paris and Trieste, a new Western Balkans Summit took place in this framework in London, in July 2018. What has been the overall contribution of the Berlin process so far and what support can it deliver in the future? Is the new impetus indicative of more credible enlargement perspectives for the countries of the region? In the region, progress remains hesitant at best, especially with regards to democracy, rule of law, good governance, economic development and good neighbourly relations. Weaknesses in these areas persist in spite of the prevailing commitment to EU accession declared by most political parties in the region. And they do not disappear even after accession -as shown in neighbouring EU Member States.

At the beginning of his address, H.E.., Mr. Martin Pammer, Ambassador of the Republic of Austria in BiH, of a country which is currently presiding over the EU Council, stated how the entire Europe, as well as this region are facing many challenges and tasks that need to be fulfilled. He added that a necessary step forward, which is in the interest of all the citizens, can be taken. In that context, he has invited the politicians to focus the dialogue more on the reforms rather than on the nationalistic rhetoric in the wake of the October general elections in BiH.

Lejla Ramić Mesihović, the director of Foreign Policy Initiative BH had underlined how it is necessary to reaffirm the accession of the Western Balkan countries in the EU, because, now that the EU is facing internal reform, Brexit and the EU Parliament elections, it is of utmost importance to keep the topic of enlargement on the EU agenda as something which is relevant and credible. In Bosnia and Herzegovina there is a lack of political awareness of how important it is to offer quality answers to additional questions from the European Commission’s Questionnaire. Without that, there will be no Avis, let alone a candidate status for BiH.

Speaking of regional cooperation, Simonida Kacarska, director of the European Policy Institute from Skopje had especially pointed out the necessity of cooperation and trade integration which are of relevance to all of the citizens of the Western Balkans.

Conference Participants were the representatives of diplomatic corps in BiH, Delegation of the EU in BiH, BiH Directorate for European Integration, representatives of BiH institutions, academic community and civil society organizations. They have all agreed that this conference was an excellent opportunity for the representatives of the region and the EU to discuss whether regional cooperation is something Western Balkan countries truly need or is it just a condition for European integration. Rule of law, and continuity in adopting and implementing legislation is still pointed out as the most important aspect  for the economic growth of the countries in the region. 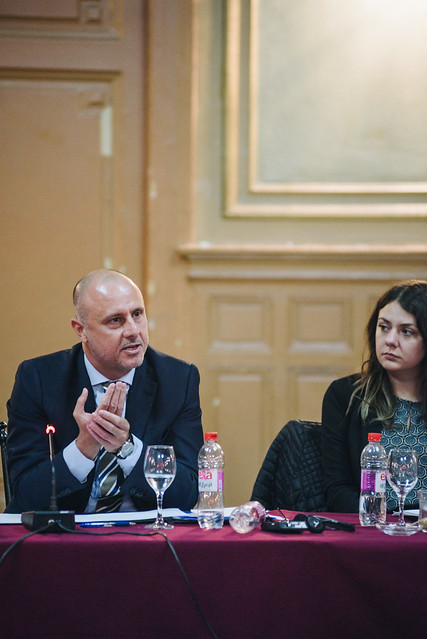