The final event of the project “Support to the EU integration process of FBiH” was held today in Sarajevo. During the last eleven months, Foreign Policy Initiative BH implemented the project in cooperation with Public Administration International from London with financial support by the UK Government. H.E. British Ambassador to BiH, Edward Ferguson opened the event which was attended by Prime Minister of Canton 10, cantonal coordinators for European integration and partners in implementing the project activities.

During the introductory address, Ambassador Ferguson pointed that the aim of the project was to build capacities of cantonal governments in order for them to “answer to obligations like providing answers to the EU Questionnaire and fulfilling the acquis. The cantons managed to answer their parts of the Questionnaire timely, and as far as I know, adequately. This only confirms that where the political will exists this country can make progress and achievements, especially on its path to the EU.” The Ambassador highlighted that the support provided through the project is “just another example that United Kingdom remains devoted to helping Bosnia and Herzegovina on its path to membership in the EU and it will continue helping in implementing the necessary reforms after Brexit”.

Prime Minister of Canton 10, Draško Dalić underlined the relevance of the role of the cantons in the process of joining the EU and that, while there are many obligations ahead he hopes they will manage to fulfil them. Dijana Dedić, Coordinator for EU integrations from Una-Sana Canton stated that through the implementation of the project they managed to primarily form the capacities and then work on capacity building and through that we had the opportunity to successfully answers to questions in the Questionnaire.

Lejla Ramić-Mesihović, FPI BH Director stated that the aim of the project was raising of internal and human capacities of cantonal governments for the EU integration process, strengthening of the network of cantonal coordinators for EU integration and support in continuing the implementation of structural reforms. Project activities aimed to help cantonal governments to adequately answer to questions from the EU Questionnaire and effectively contribute to the work of coordination mechanism. 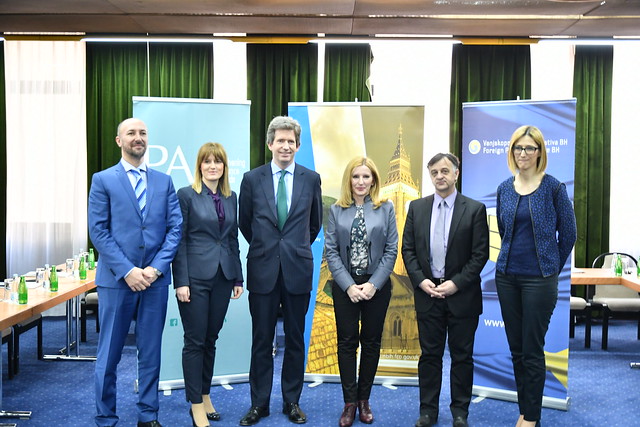 Challenges of the Enlargement Process and Regional Cooperation
Seminar for CSO from BiH: “Effective monitoring of public policies”