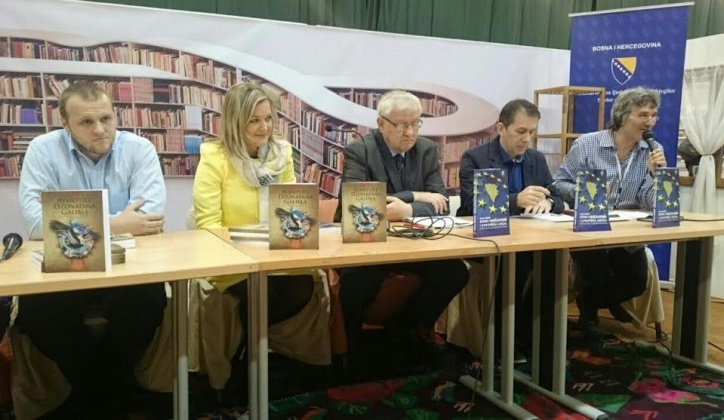 Hoda Dedić's  book “Bosnia and Herzegovina and the EU – Assumptions and Reaches of the Integration“ was printed by Bosanska riječ from Tuzla in 2015. The book was presented in the beginning of 2016 as part of the project ‘Cultural Year Austria – Bosnia and Herzegovina 2016’ and promoted on this year's book fair in Sarajevo. The focus of the book is the question of relations between the EU integration process and internal changes in BiH.

The text elaborates basic principles of European integration, ideas and the process of European unification as well as the political system and decision making process of the EU. The author analyzed EU integration politics in the accession process and based on that the assumptions of the process of BiH's EU integration. In over six decades of existence, the EU has presented itself as an alternative to historic creations – national states, by becoming a competing community of states at a global level. The motives for integration into the EU have been predominantly political in their nature since EU membership enabled each country stable political development and economic progress. The book analyzes the phenomena of EU integration in the context of complex social-historical and social development of states in Europe after the Second World War.

Compared to other countries from the region, Bosnia and Herzegovina is in a specific transition process. The process of post-socialist transition of BiH, which is being done in parallel to its situating into EU institutions, is determined by the engagement of the international community based on the jurisdictions from the Dayton Peace Agreement (DPA). By analyzing the determinants of the political system and political pluralism in BiH, starting from the first elections after the DPA was signed, in correlation with the role of the international community and the EU in BiH, the author elaborated the shaping and implementation of reforms in the EU integration process of BiH. Analyses of historical-cultural and political determinants of BiH's EU integration process and the effects of EU membership of Central and South-East European countries are presented through a comparative analysis.

Special attention is given to the perception of citizens of this process as well as the historical development of the civil society sector in BiH from the beginning of the reforms during the Ottoman rule in the 19th century to the formation and role of civil society in the post-Dayton BiH. Civil society organizations developed during different phases of social and political development of BiH from the Ottoman to the Austro-Hungarian period, the period between two world wars to the times of socialist development (1945-1992). Despite predominant ethnic divisions, most of BiH citizens support the country's EU membership. However, due to the undeveloped role of the civil society in BiH and marginalization of citizens as individuals, the articulation of this desire has not been successfully done.