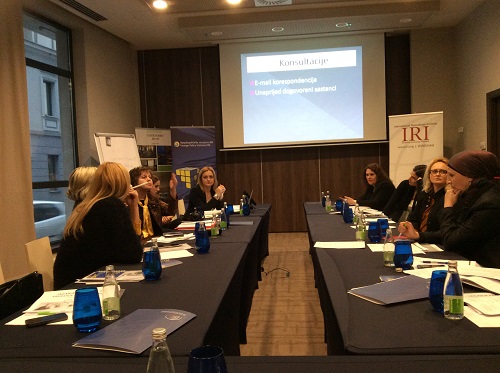 On February 10, 2016 members of the Women Caucus of Parliament of the Federation of BiH, in cooperation with Foreign Policy Initiative BH and International Republican Institute, organized the round table „The Initiative of Women Caucus of FBiH Parliament for equalizing the maternity benefits in FBiH“ and conducted initial consultations about forming public policy for more articulated initiatives of the Caucus to ensure equal rights for maternity benefits in all cantons.

Round table was an opportunity to present data which clearly show problems and discriminatory solutions in this sector and participants discussed different ways of ensuring a sustainable financing for this right. Kenela Zuko, the President of the Caucus, stated that there is discrimination in maternity benefits in Federation of BiH. „All mothers are the same, all deserve equal rights,“ Zuko noted and emphasized the support of the Prime Minister of FBiH in resolving the issue.

The round table was followed by consultations with experts from Foreign Policy Initiative BH during which the structure and content of the public policy on enabling equal rights for maternity benefits were discussed.

The event served as a platform for presenting the initiative of the Women Caucus for aligning the maternity benefits and it was emphasized that the initiative should be on the Agenda of the next session of House of Representatives of FBiH Parliament. Through cooperation with the civil society organizations and analyses made by ombudspeople and non-governmental organizations it was clearly stated that discrimination in this area exists in the Federation of BiH. Members of the Women Caucus believe it is necessary to pass regulations which would in an uniform way dealt with the issue of maternity benefits and enabled equal rights for obtaining the benefits. The members of the Caucus underline that there is a legal basis for such initiative and that it can be found it the FBiH Constitution. Members of the Caucus emphasized the need for stronger roles and participation of women in all spheres of life in BiH.

The activities are a part of the project financed by the Embassy of the United States in BiH.

Round table: „ERASMUS for entrepreneurs and in BiH?“
Interview with Lejla Ramić-Mesihović: We are little ahead of Kosovo on our EU integration path