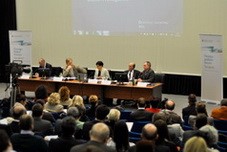 The Stabilisation and Association Agreement once more did not enter into force this year, although formal preconditions for this were met towards the end of 2010. One of the most notable cases of collateral damage is in the domain of democratic principles and human rights is the harmonisation of the Constitution with the ruling of the European Court of Human Rights in the case of Sejdić and Finci vs. Bosnia and Herzegovina. Furthermore, the manner of decision-making in the seven-member State Aid Council was the most problematic issue; the negotiations centred on ethnic representation in the decision-making mechanisms instead of essential issues and technical aspects of the law. The situation which emerged during the programming of IPA 2011 funds revealed serious structural faults in the co-ordination mechanisms related to the planning and programming of EU funds.

BiH authorities failed to prepare for Croatian accession to the EU in a timely manner which will further limit the already modest potential of BiH exports and deny domestic producers access to foreign markets. The Report concludes that one does not join the EU based on intermittent outbursts of goodwill and examples of individual ardour of civil servants, but through systematic commitment to approach the process of fulfilment of conditions with all available resources and with strong political will.

These are some of the conclusions of the Annual report for 2011, presented by the Foreign Policy Initiative BH (FPI BH) on Wednesday, February 23, 2012 in Sarajevo. Over 100 participants from local and international government and non-government institutions and organizations attended the presentation.

Next to Ms. Lejla Kablar, the Director of the FPI BH who presented the Annual Report for 2011, other panellists which included Mr. Halid Genjac, Chairman of the Committee for European Integration of the BiH Parliamentary Assembly, H.E. Mr. Peter Sorensen, Head of the EU Delegation in BiH, H.E. Bosse Hedberg, Ambassador of the Kingdom of Sweden in BiH, and Mr. Amer Kapetanović, Head of the EU Department in the BiH Ministry of Foreign Affairs, all gave their expert opinion of the situation in BIH as well as of its path to the European Union.

At the presentation of the Annual Report for 2011, The EU Special Representative in Bosnia and Herzegovina, H.E. Peter Sorensen, indicated the that year 2011 was not the year of EU in BIH, however he expressed hope that this year might be the year of the EU in BiH. He pointed out that without the SAA coming into force, the BiH membership candidacy for the EU will not be accepted and no experts from Brussels shall be invited to come and assist BiH.

The Ambassador of the Kingdom of Sweden in BiH, H.E. Bosse Hedberg stated that the past year did not bring many tangible results on the road to the European Union. Observing how in the past two weeks, several positive steps have been undertaken on the BIH’s road towards the EU, Hedberg pointed out that there are still many unresolved issues that need to be resolved. He invited political leaders in BiH to take the responsibility for the welfare of each citizen and each part of BiH.

Mr. Halid Genjac, MP in the House of Peoples of the BiH Parliamentary Assembly and the Chairman of the Joint Committee for European Integration of the BiH Parliamentary Assembly stated how during the past five to six years BiH suffered a period of terrible holdups in its European road, each of them spanning through long periods of time. In his words, BiH could quite quickly resolve all technical issues standing in BiH’s road to the European Union, however there are problems in regard to political criteria. He pointed out how BiH is now creating a new political ambiance.

Ms. Lejla Kablar, the Director of the FPI BH, stated how the multiannual and institutional holdup in BiH had its culmination in 2011. She pointed out that the process of the European integration in BiH is still only at a declarative level. BiH must meet the conditions for a credible application for the EU membership by the middle of this year, establish a sustainable system of horizontal and vertical coordination in the EU affairs which has a interlinked technical, political and institutional aspect.

In her opinion, in order to jump start the European Integration Process from the still point, BiH will have to go from a declarative to a working consensus, which implies that the politics creates the space and the expertise fills it out, and it must, without any further delay, enable for the SAA to come into force.

Lecture on the topic Fiscal union for the euro area: an overdue and necessary scenario?
Presentation: „To the EU via the Environment“