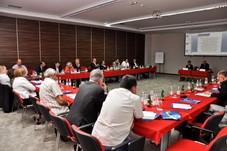 Fourth Seminar/Workshop under the Project: “Introduction to the Lisbon Treaty for the Staff and Members of the BiH Parliament”

The fourth workshop/seminar under the project: “Introduction to the Lisbon Treaty for the Staff and Members of the BiH Parliaments”, organized by the local NGO the Foreign Policy Initiative, and with the financial support of the Government of Great Britain was held on 03.-04.10.2011 in the Hotel “Garden City Konjic” in Konjic. The participants of the Seminar were the members of the state and entity parliaments, as well as their expert staff.

With that purpose in mind, FPI BH has organized four seminars with presentations on key areas of institutional development: widening the field of common decision making between the European Parliament and the European Council; the new role of the state parliaments within the scope of the new regulations of the Treaty; the changed nature of the presiding over the EU with the creation of permanent position of the EU President; the new architecture for governing the EU foreign policy which comes from the changed role of the High Representative and the establishment of the European External Action Service.

Third Seminar/Workshop under the Project: “Introduction to the Lisbon Treaty for the Staff and Members of the BiH Parliament”
Statement by the Foreign Policy Initiative BH media on the occasion of the latest progress reports on BiH