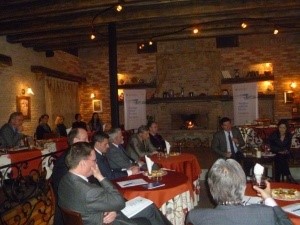 On February 16th 2011, Foreign Policy Initiative BH held the first in a series of events which will focus on different aspects of BiH foreign policy, based on a concept of Kamingespräch (fireside chat). This is a German concept of casual fireside conversations about current affairs, meant to create an enabling atmosphere for open exchange of opinions between experts, diplomats and civil society representatives.

In the pleasant atmosphere of the Sports Club “Una“, the BiH Ambassador to the UN, H.E. Mr. Ivan Barbalic, conveyed his direct experiences from the January Presidency of the UN Security Council, referred to other aspects of the non-permanent membership in the UN Security Council and spoke about future commitments during the remaining 10 months of membership. Representatives of the BiH Ministry of Foreign Affairs and Presidency staff, Ambassadors of Germany, Turkey, Slovenia and Austria, as well representatives of the UK, Swiss, and Chinese embassies commented on the successful Presidency of the UN Security Council. It was also an opportunity to discuss the broader impact of this experience on BiH foreign policy and establishment of more effective internal mechanisms of coordination and communication.

FPI BiH plans to continue organising similar events in future, focusing on the situation in the Middle East, German foreign policy in BiH, and other topics relevant to profiling BiH foreign policy. Discussions will be substantiated by analytical reports which will be written by our experts and associates and published on our webpage.

Presentation of the Comparative Report for 2009 under the Project “Monitoring of the BiH European Integration Processes”
Presentation: “The State Aid Requirements under the Stabilization and Accession Agreement between BiH and the EU”