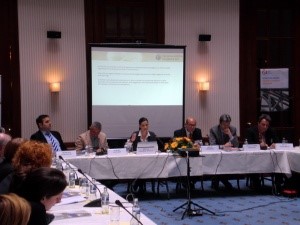 FPI BH presented the Comparative Report on the Monitoring of the EU Integration 2009: Western Balkans – Bosnia and Herzegovina. Uneven progress in the Western Balkan countries and BiH is second to last. In BiH 85% of the interviewees supports the EU integration and finds that the government’s activities for the realization of the necessary reforms are insufficient.

The European Union Institute for Security Studies, in cooperation with the Foreign Policy Initiative BH, organized a seminar in Sarajevo from 19th to 21st of May 2010 entitled “The Western Balkans: the Path to European Integration”.

The conclusion was that the EU Integration Process is a means for the creation of functioning states, but that the mechanisms of the Process are not suitable for the states that have problems in functioning and creating political consensus. That is why further incentive by the EU is necessary in order to eliminate the influence of the rhetoric of the past and to further encourage regional cooperation which has proven to be possible, useful and desirable for all of the Western Balkan countries. European Union is built on future and not on past, and that is why it still has very strong appeal, because it advocates unity within diversity. The rule of law is the basis for achieving the values of the EU, and the civil society needs to be empowered in the coordination of activities on advocating reform processes.

In the panel chaired by the Swedish Ambassador in BiH, H.E. Mr. Bosse Hedberg, the Director of the FPI BH, Ms. Denisa Sarajlić-Maglić presented the Comparative Report on the Monitoring of the EU Integration 2009: Western Balkans – Bosnia and Herzegovina, with a special focus on how BiH is ranked in that process, when compared to the other countries form the region.

Uneven progress was achieved in the countries of the region, and the best results were achieved by the countries with stabile governments, majority in the Parliament and functional political system. The common weaknesses are insufficient levels of fight against corruption, respect of human rights, functioning of judiciary and bilateral cooperation. In the majority of areas BiH is second to last in obligation fulfilment, in front of Albania, including the visa liberalization issue, while Croatia is the leader in this process. The public opinion poll conducted in December indicates that the citizens think that the government’s activities for conducting the reforms are insufficient; they mainly blame the local politicians for that. Close to 85% of the BiH citizens finds that the future of BiH is in the EU and that there is no alternative to that. Citizens in both entities share that view. Close to 75% of the interviewees in the entity F BiH and 45% in the entity RS are prepared to support the transfer of competences from the entities to the BiH state if that is to speed up the road towards the EU. At the same time, 55% of the interviewees believe that the EU citizens wish to see BiH as an EU member country in the future.

Enlargement policy is the baseline of the EU external policy. A clear political message is expected from the upcoming gathering of the Foreign Affairs Ministers of the EU member countries in Sarajevo that will reaffirm the Thessalonica Declaration and the Copenhagen Criteria, and re-evaluate the system of additional conditioning of potential candidates and candidates for EU membership. Enabling further steps towards the EU would be a positive impulse for the public of the region as well as for the administrations of the aspiring countries.