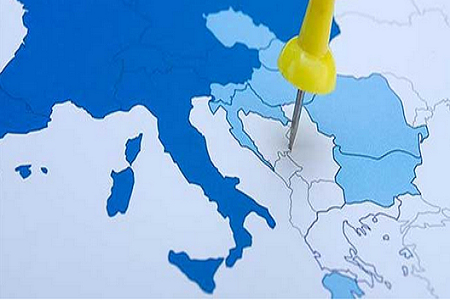 The so called ‘historic’ discussion between Serbia’s president, Aleksandar Vučić, and Kosovo’s president, Hashim Thaçi at the European Forum Alpbach in Austria that proposes an exchange of territories between two countries is not a landmark move towards future, but a huge step back deep into the past. Without going into the merits of the proposal and whether it would actually resolve ancient disputes between Serbia and Kosovo, we feel a need to send a warning about the implications of any re-drawing of borders for other countries in the region.

The retrograde ideas of redrawing borders would be devastating for the peace and stability in the region. The alleged tacit support of main international players to this idea is even more devastating, and strongly reminisces of the international inertia towards the conflict in Bosnia and Herzegovina in early 1990s. The silence of the EU Commissioner Johannes Hahn in the same panel was painfully symbolic of the EU’s role during the conflict in Bosnia and Herzegovina in the 1990s.

Any proposal to change borders and exchange territories in the Balkans is not cosmetic and it would be naïve to believe that such proposal could be contained to ‘small’ territories which the change would directly affect. Voices of former European diplomats in the Balkans and experts who have in recent weeks supported this idea through international media blatantly ignore history and facts by suggesting that new divisions would be part of a solution and not part of a problem. Any border change in the Balkans is not solution, it is a blueprint for new disasters. Even having to say this after everything the region has been through over the past 25 years feels surreal and unbelievable.

We thus appeal to international actors to recognize the hazardous rhetoric that invokes uncertainty that has led before this region to disastrous consequences. We appeal to you not to hide behind the pragmatism of EU integration, and instead distinguish between fallacy and facts. Delusions that ethnically ‘pure’ entities or nation states are a solution for this region are not new – their actual engineers have already been convicted in The Hague, and the victims of those ideas lie buried throughout this region. We refuse to accept the idea that there is no other choice but to divide existing states and societies along ethnic lines. And we would note that recent history shows that such divisions cannot be implemented peacefully. To ignore this, we would need to forget the experience of the 20th century with ethnic cleansing and the forced movement of people. To accept this argument would be to turn a blind eye to the genocide, crimes against humanity and war crimes of the 1990s.

It is a logical fallacy that, with initial round of political divisions having failed to appease nationalist passions in the region, another round will somehow do the job. Instead, as should be obvious to any discerning reader of history and politics, championing divisions simply creates new cleavage lines in the region. The facts and arguments that prove that ethnic cleansing and creation of ‘pure’ nation-states is a bad idea have been overly presented in numerous publications and conferences over the past 25 years. Many of us have devoted most of our professional lives providing such facts and evidence so that new generations can remember how dangerous the nationalist rhetoric is, and how it can lead to projects that risks thousands of lives being lost. The facts are out there – in history books, in academic publications, and not least in court judgments.

We take this opportunity to remind the international community of those facts, to appeal to you to stay on the side of maintaining peace in the Balkans. Peace in the Balkans is your legacy – please preserve it. Please take into account the wider regional context, the threats to stability in Bosnia and Herzegovina and the decades long undermining of its institutions, and continued claims for autonomy of one of its parts. Part of that context is the glorification of war criminals in all countries in the region, as well as the nationalist radicalisation in Croatia. There are individuals in all Balkan societies who still cherish the notions of greater, ethnically ‘pure’ nation-states. Many of them do so for purely opportunistic reasons, attempting to hide the bankruptcy of their political vision behind the ideology of nationalism. It is the job of democracy to keep those individuals on margins of our societies. And it is the job of democratizers to keep democracy on track, to keep divisive ideas on margins by preserving and promoting facts, and to persistently promote the norms and values of democratic societies. It is your job!

Re-drawing borders is anti-civilizational, it is an attempt re-write history, and to re-introduce alleged Huntingtonian clashes to our societies at a point when many of us in civil society are investing efforts to sustain the motion in the opposite direction. Such proposals undermine multiculturalism and multi-ethnicity as values upon which history and future of our societies must rest, upon which Europe still rests.

If division to nation states is a blue print for the Balkans, is it a blueprint for European states too – for Belgium, the Netherlands, Sweden, Switzerland, United Kingdom? Although this is a rhetorical question, the answer is still clear – it is a blueprint for new conflicts. We are appalled by the implied pretence that a proposal with such content could be seen as benign in a global context that has already been tarred by rising xenophobia, radicalism, extremism, and divisive rhetoric.

We urge the European Union and all its institutions, NATO, the United States and other individual players to distance yourself from the ideas expressed in Alpbach. By propagating ideas which could entail a return to massive human rights violations, ethnic cleansing and the rewarding of extreme nationalist forces, and being based on dubious claims and few facts, you are endorsing the darkest policies pursued in the Balkans over the past decades.