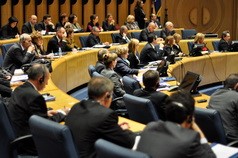 The Foreign Policy Initiative BH has organized the First Regional Conference of the Members of the Parliaments from the EU, BIH and the region. The Conference was attended by the presidents and the vice presidents of the Committees for the European Integration from Croatia, Montenegro and Macedonia.

Welcoming speeches were held by H.E. Peter Sorensen, Head of the Delegation of the European Union in BiH, H.E. Nigel Casey, the Ambassador of the United Kingdom of Great Britain and Northern Ireland in BiH, Mr. Denis Bečirević, the Speaker of the House of Representatives of the BiH Parliamentary Assembly and Ms. Denisa Sarajlić-Maglić, the Director of the Foreign Policy Initiative BH.

In her introductory speech, the Director of the Foreign Policy Initiative BH, Ms. Denisa Sarajlić-Maglić stressed how the BiH European road is defined by the signature placed on the legally binding Stabilization and Association Agreement. Ms. Sarajlić-Maglić emphasized how the fact that there is no consensus on forming the Government, does not mean that the Parliament can relinquish its obligations towards the European Union or the responsibilities to those who elected them. The Speaker of the House of Representatives of the BiH Parliamentary Assembly, Mr. Denis Bečirović added that the European Process is crucial when it comes to the relationship of legislative and the existing executive power. The head of the delegation of the European Union to Bosnia and Herzegovina, H.E. Peter Sorensen underlined in his introductory speech how the Parliament now has the key role; that role is in the hands of the Committees for the European Integration – one at the state level, and two on the level of entities. The UK Ambassador to Bosnia and Herzegovina, H.E. Mr. Nigel Casey reminded that Bosnia and Herzegovina still has three key conditions to meet that concern adopting the State Aid Law, the Census Law and to demonstrate credible effort in implementing the decision of the “Sejdić-Finci” case.

The President of the Committee for the European Integration of the BiH Parliamentary Assembly, Mr. Halid Genjac, stated at the conference that our country would have had a better pre-accession position today it its political leaders had used the wasted energy and time focused onto the issue of forming the new post-election Government, for fulfilling the European conditions.

Ms. Vesna Pusić, President of the National Committee in the Croatian Parliament and a member of the Committee for European Integration, stated as a Conference participant that the experiences of her country in the process of European integration are the “the most applicable” and useful for our country. .

Miodrag Vuković, President of the Committee for European Integration in the Montenegro State Assembly said that it is an important precondition of regional joining to the European associations – cooperation of the countries in the region, without which they cannot qualify.

Jani Makraduli, The Vice President of Sobranje, expressed hope at the Conference that the countries in the region will, all together, be in the European Union, although, for now, he fears the negative, December European assessment for his country due to unresolved issues with Greece.

Mr. Tim Judah, author and frontline reporter for “The Economist” and Ms.Petra Blass, former Vice President of the German Bundestag had also participated in the panels of the Conference.